Brexit has certainly made life interesting this past year and unfortunately caused uncertainty to residents living in Spain and those looking to make the move. Hopefully the General Election in the UK on 12 December 2019, will provide greater certainty around the future relationship that the UK will have with the EU.

This past year we have been privileged to participate in numerous Brexit events and seminars up and down the coast, including an appearance on BBC Breakfast TV, to be interviewed by the national newspaper El Pais and to talk in the Manilva Town Hall Seminar with Britain’s new Ambassador to Spain, Hugh Elliott. The UK has an excellent relationship with Spain bearing in mind that more than 18 million Brits visited Spain in 2018 and up to 1 million own property here. 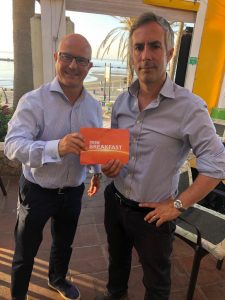 Many expats have expressed concerns about access to healthcare post Brexit. Alex mentioned that Spain passed a law on 1 March 2019 which has two objectives. Firstly to preserve the rights of British and Spanish citizens in the event of a hard Brexit without a withdrawal agreement being agreed between the EU and the Great Britain. Secondly, to preserve the flow of business between Spain and Britain. The Spanish law specifically covers the rights of British citizens living in Spain. If you live in Spain for more than 6 months a year, the key to maintaining access to healthcare is that you have to become a Spanish resident.

Our advice throughout the year and since the referendum result is if you live in Spain for more than 3 months a year, you should apply for Spanish residency. If you live for more than 6 months a year in Spain then you automatically become a Spanish tax resident and pay tax in Spain on worldwide assets and income the year after arrival. If you are planning to move to Spain in 2020 you will still be able to apply for and obtain Spanish residency until 31 December 2020. After this date we expect that the criteria may change but Spanish residency will still be possible as it continues to be for non EU nationals moving to Spain.

The team at My Lawyer in Spain are assisting clients all over Spain with their residency process and strongly advise those who do not have residency, to obtain this as soon as possible.

If you would like to discuss the residency process, contact the team at My Lawyer in Spain.

Thank you to all your colleagues for making the purchase of the apartment in Torreblanca so easy and stress-free for my wife and myself.